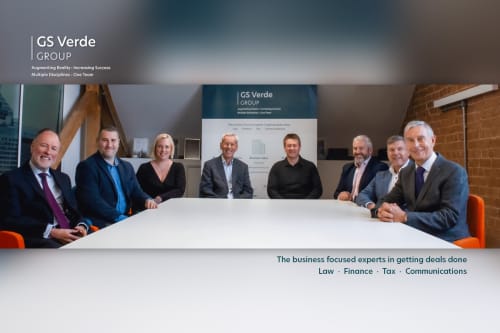 Specialist merger and acquisition advisory business GS Verde Group has appointed Gavin Johns as its new Chairman, as the Group embarks on the next phase of its acquisition and growth strategy.

A technology entrepreneur with global expertise in fintech, mergers and acquisitions, finance and business scale-up projects, honed through almost three decades in industry, Mr Johns' skill and experience in scaling disruptive business models, global markets and fast-growing business will be a real asset for the GS Verde Group and its clients.

He succeeds Peter Wright, who is stepping down after more than eight years as Chairman of the GS Verde Group.

Commenting on his appointment, Mr Johns said: "I am delighted to be joining the board at GS Verde Group, at a time of growth and opportunity for the business - both in the UK and further afield.

"I look forward to working with the Group in its next phase of growth, as we develop GS Verde's presence' in the UK and internationally."

Peter Wright, departing Chairman, said: "It has been one of my greatest satisfactions to see how the Group has blossomed and grown into such a powerhouse in the corporate deals market. I wish all the team every success as it moves onwards and upwards."

Following a brand alignment last year to bring together GS Verde's seven disciplines, which include law, corporate finance, tax and accountancy services into one collective Group, the business has demonstrated extraordinary growth.

M&A activity has soared within the group and GS Verde has advised on over 30 corporate transactions already in the first nine months of 2022, with an aggregate value of over £300m. The Group also has a significant and robust pipeline established for the remainder of the year and into 2023.

Independent verification of the GS Verde Group activity level has been seen in the Experian Market IQ Reports with the Group having been consistently named as the most active corporate finance and legal advisors in Wales.

Nigel Greenaway, GS Verde Group CEO and co-founder said: "We are exceptionally grateful to Peter for his support and contributions over the last eight years, which have been invaluable in assisting with our establishment and then growth in that period.

"We have now reached a target milestone that will allow another significant step forward, and Gavin has an exceptional reputation of driving pioneering companies to great heights. With an innovative structure and approach, the team at GS Verde Group is proud and excited about adding his skills to our board."

Having grown to over 70 individuals, the team at GS Verde spans the Group's seven disciplines and three locations in Cardiff, Bristol and Dublin. This year alone, capacity has more than doubled through expansion at both the Cardiff head office and the Bristol city centre office.